The Beast of RAGE

A Long time ago

The lost child known as Samson was the first child of the Astral Mother, but died due to a miscarriage. The Astral Mother at a young age was filled with grief and did everything she could to bring back the child she had once lost, however from the remains of the child she could gather there wasn't anything she could for this amalgamation of what once was her child. Samson was later then on experimented on in hopes of making progress on helping the child develop more, but after many many MANY failed test the Astral Mother utterly gave up on saving him, but instead did everything she could to preserve the child. Using other failed test from William and Adam the Astral Mother poured all of her knowledge into making sure that Samson could never be hurt or would be able to defend himself from any threat he would encounter, so she attempted to train him, but the infant was entirely incapable of anything, anything but destruction. During one of the his test Jacob discovered Samson's existence. When Jacob saw the child he attempted to kill it our of mercy due to how much it was suffering however once the first inch of Jacob's sharp bone pierced its body the child's body morphed and changed into a hulk of entity that once at full mass was incapable of receiving any sorts of physical damage for the DT that had been used on it all its life was keeping it alive some methods even being questionable.

The Astral would return to the laboratory utterly destroyed and Jacob's body smashed to atoms a event he would never forget and from this day has nightmares of a figure with red glowing teeth and bloodshot eyes. The Astral Mother never let the child out of her sight, but once the destruction of AlphaTale came Samson was lost to the void surviving off of his own Will to live, but with him now residing in a place of existence and Non-existence his mind would become more whole then ever allowing him to see future events Eons ahead of himself. He later would hide from the world for it terrified him and later when found by others would be seen as one of the many Gods to surface from the Gods vs Man events of the Multiverse's earliest stages of existence and later would be known from the runes on his body as the unstoppable 100

Samson the child is entirely fearful of the world around him and can hardly stand the wind that blows against his malformed body. He often spends a large amount of time just either sleeping or suffering in silence and away from others truly wishing to be left alone. He is entirely incapable and any other kind of thought other then crying, knowing when he's in danger and knowing events before they happen.

The Beast of Rage incarnate, Known by many to be unstoppable and unwavering in his rampages across the Multiverse, while the Black Being caused many to Flee their known Universes and was forewarned often enough, most Universes that Samson rested or hid away in wouldn't be aware of him until he sparked into a Rage and began to destroy everything in sight. 100 is the pure shape of Samson's rage and hate for his existence showing a complete and alternate side to his quiet and Silent persona using his Rage as his conduit to pursue conflict and won't stop fighting till something takes him down. He shows clear signs of being unable to speak due to his blindness to it all and can even show signs of being sadistic in nature and more fearsome then even Infected himself.

Weak, a puddle of shame and utterly a waste of life to most who would first see him and he'd probably agree with you if he could. Samson is covered with Runes of Determination all over his liquefied body. His body is nothing, incapable of movement entirely and can only teleport as a means of movement when he's slept for more then 1 year showing how long it takes for him to get a spec of power just to run away.

A large imposing skeleton that out classes many, he's entirely a naked and has a large opening where his mouth is used to be to which now holds 3 sharp rows of DT teeth so sharp they can cut down to the bone just with a touch. 100 stands at a shocking 11'4 feet tall and his hands are so big they can wrap around the faces of two humans at once. His feet are so large and weight is so intense that his walks along common ground can cause him to have imprints in about any surface.

Samson is able to teleport from Universe to Universe swiftly even to places he isn't even aware exist, however unless he gets a years worth of sleep he won't be able to do anything

Coming form a place even unfamiliar to even himself 100 has a bottomless source of energy and power making any fight hes in one of stamina, but if he continued to get angered and his Rage rises he will continue to stronger and attacks more deadlier then that last.

100's strength is spoken through whispers to be so mighty he can crush whole mountains with just one punch alone. Being entirely able to knock any figure head in the multiverse on their ass with little difficulty and even has been rumored to strike fear into most gods who know of him.

His Shout is said to shatter the atmosphere of any planet he's on and 3 planets after.100 has also screamed so loud and at such a high velocity that he can shatter the bones of anyone he encounters who isn't a God or higher and even then its been rumored to still show cracks. The Shout also allows him to be able to teleport making a wormhole in front of himself to escape from.

The Jaws of Determination are said to be so sharp that he just touching them is said to cut through flesh in bone in a matter of seconds, His bite force is said to be that of 5,000,000 Psi even being able to crush Infected's skull into paste with just a nibble being that of 50,000. When using his Jaws he is able to bite through any attacks, plasma or bones or DT made which he just adds to his own stockpile.

Having only used it once, 100 has a plasma beam that shoots at of his mouth that's so potent and so unnatural that it burns straight through the Multiverse itself reaching the Mainframe. The blast although has never truly hit anyone due to its incredibly long charge up is said to be unsurvivable and is a MUST dodge for anyone fighting the monster and as been put in records as being one of the worst ways to die in the Multiverse even though no one has been hit by it.

From some who have seen it, if 100 ever gets his hands on you he is known to hug his enemies to death by crushing them so hard their bones shatter like glass against a truck.

Unable to use his determination for anything else, whenever Samson or for whatever reason 100 is killed he is able to harness the determination stored inside him and completely rebuild himself, however doing this causes him to turn back into Samson

Samson even though unable to comprehend it he has a large steaming hate for his younger brother William for reasons he doesn't even know of.

From finding him the laboratory and attempting to kill him now whenever Samson awakens into 100 he attempts to hunt and find Jacob if he can after he's done with his destructive rampage.

Whenever Ares was down in the laboratory he would always see Ares's wondering eyes look towards him, now all he wants to to do is pluck those eyes out. 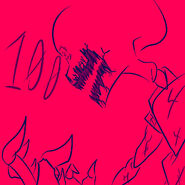 The boy and the Monster drawn by SHADIKAL15 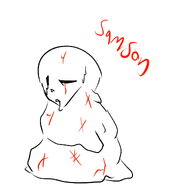