(Killed by Infected) (Currently a ghost)

Alpha! Sans wears a long white jacket, with a hood that reaches to the back. He wears pink shoes that have lost almost all their color and a white shirt too. He wears black sweatpants that have a vertical blue stripe on each leg. His jacket has fluff on the hood.

Alpha! Sans is a very distant person and finds it difficult to get in touch with his brothers. He loves all his brothers and likes to take care of them as a big brother figure. He loves to drink tea and eat cake. He wants to be believed in.

The Boy he once was is always there in the back of his mind wondering if he should just slip away and never come back, but he knows somewhere out there that someones crying for help and he can't refuse to answer. But he would do anything just to die and live with his family again.

By using this, he has the power to jump to any AU that he deems appropriate to visit.

the ability to erase and distort the memory of any person in front of him, making them forget that it existed.

Unless someone believes in him, he cannot be seen, heard, or touched.

This allows Alpha! Sans make 2 hate eyes of Gaster and this power dramatically increases his power, giving him immense power of magical impulse.

Alpha!Sans can mend and bend timelines at will, giving some worlds the perfect ending they deserve while damning others.

Every once in awhile, Alpha will take off his mask and reveal his true power, these new eyes of Hate manifested while he was dead and thinking about all of the things he can't and never did. Now, he posses 2 eyes of hate that he only uses when he needs to.

Alpha can cipher the DT from others.

Out Code no more

Alpha can reverse the effect of what has made an Outcode what they are, so long as the individual is not stronger than him this is possible.

This gives Alpha the ability to put them in a hell-like dimension where they are being forced to carry the weight of their guilt depending on what's the worst possible action the person has made in their lifetime.

Transformation Judge is a form taken by Alpha when he's code has been tampered or he's been killed again, which then causes him to relive his death, overcome with dread and a determination not to die again, Alpha reacts and regains his physical form while also absorbing every soul in the multiverse. This form allows Alpha to gather all the souls in the known Multiverse to aid him, His physical form takes a huge hit, as he grows 2 huge arms that expand for 30 miles long and a size of 30 yards from his back along with 10 huge wings that each dwarf mars. Both of his eyes began to cry tears as souls upon souls fluctuate and appear in his eyes, with all the souls Alpha's body melts a rapid rate, but thanks to the Kindness souls keeps him together. Along with this Alpha creates a bone sword that has 30 Determination souls lined through it. Every being in the multiverse will be left soulless for the entirety of the fight.

These souls heal Alpha to full Hp ever 2 milliseconds

These Souls fuel Alpha's Will and allow him to continue to fight for even longer, losing no stamina at all.

The Souls of Bravery would allow Alpha to do great in Close Combat, making him deadly up close.

These Souls allow Alpha to wait for opportunities being able to strike with perfect percussion and knowing exactly when to attack and to back off.

The Souls of Justice when activated fire Thousands of blast at a time, decapitating and paralyzing his opponents.

The souls of Integrity make Alpha Appear to be very intimidating

This power allows any dark,evil entity to be killed with a “ Goner “ button,this is very useful for bad sanses.

Alpha worked with his brother Error!404 and they both lived happily in their AU Alphatale, but this happiness didn't last long since a Sans murderer was walking over killing all his friends. Error404 had the idea of ​​stopping him, but Alpha sans knew it was a bad idea In the end, however, they chased him and fought him. Alpha!Sans was killed during a battle, the last thing he saw was the face of his poor brother Error!404. After a while, he woke up and found himself in a place unknown to him, his outfit was different and he heard the screams and sounds of pain, he walked to where he was and shortly thereafter he found the decomposing body of what his brother used to be, Alpha!Sans groaned at the loss of his brother. His soul was empty, he lost any thought or hope of returning to his AU, so his attempt to fix what had gone wrong. Now, he wanders making sure that each AU is well forever, without being seen the Ghost of the Multiverse.

Now, Alpha is completely oblivious to the fact that his brother is alive, but still wanders thinking he is dead and vice versa.

Being the original AU Sans makes, it a great fraternal figure for any other AU created later.

I'm not crying (Made by Voidless) 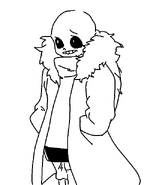 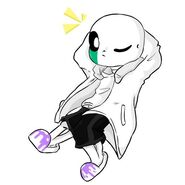 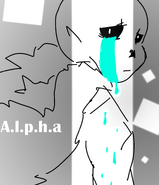 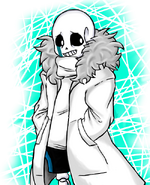 (Created by TOKI! 502 inspired by the image of Alpha Sans)

The background
Add a photo to this gallery

Retrieved from "https://alphatale.fandom.com/wiki/Alpha!Sans?oldid=3391"
Community content is available under CC-BY-SA unless otherwise noted.