"Let's take a Journey into the Unknown"
– AlphaTale!Chara

After the Astral Mother's take over of the underground, The Astral Mother's first course of action was to threaten the Human race once more. She bargained that if she were to get two subjects for her new test that she would leave the humans alone. Humans were fearful of what would happen than proceed to give two human infants over to her for her experiments.

In the Underground (Chara)

Chara besides Frisk was naturally gifted in combat and had no issues fighting against others, During his time training one day one of the "Doctor's" Kids made their way down to the training room and instead of shoo the kid away Chara and the child got along just fine. They hung out for many years and eventually would become the biggest relationship in the whole Kingdom. Chara continued to train for 8 whole years and passed almost all her experiments and was therefore given the difficult task of Guarding the Ruins against trespassers and...others

Chara is a very violent individual, always using violence as their first means of communication either it be friendly or not. Chara had very little friends and often didn't get along with most others. Chara eventually found someone who He could appreciate and Love. The relationship leveled Chara's temper and violence to an incredible.

His Lover and His Brothers

There's no doubt that Chara holds his love above all the others of his kin. Chara doesn't get along with anyone else other than His love.

"The Astral Mother can burn and rot in hell"

Throughout most of the tests given to Chara, He was injected with massive amounts of Justice and Perseverance. These took a huge toll on Chara's mind and mental health resulting in many drug prescriptions and loads of meds just to get Him through the day. Tho this allowed Chara to have the strength to fight 10 armies. Not only that Chara had gotten so strong that the "Doctor's" right hand was given orders to watch him.

This ability allows Chara to sink his knife into any opponent and give them DT, once done the DT will then explode killing the Victim.

One of the many tests Chara and Frisk went through was the fact they had to share DT. This amount and the amount he gained later gave Chara the ability to Reset, but the "Doctor" wanted something more than that so she and Chara continued to experiment with Reseting until one day the Reset button became something New. The Strength of this new Reset is unknown, but it is in theory that it can wipe out all existing Timelines and previous ones as well.

Chara wishes to reunite with William at all costs, will kill anyone and anything to do so.

Chara made by Niko 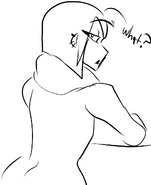 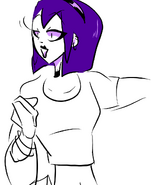 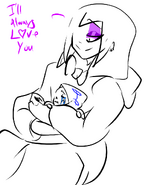 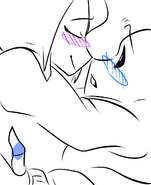 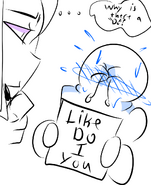 ????
Community content is available under CC-BY-SA unless otherwise noted.
Advertisement