Cyan colored Soul in his Left socket
Cyan!Sans is a Sans-type skeleton who was born from a universe known as DominionTale. He has a brother named Admiral who is a Papyrus. His father is known as Dr. Destro, who is a Gaster skeleton who is also classified as a "Shadow Walker".

He was created by Kagami Shinami

When Cyan was 15 years old Skeleton wise he was abducted by Humans who invaded the underground. For 6 years he went through countless painful experiments. This includes him becoming comatose due to drugs and other testing products. After finally escaping he found himself outside of the underground. Unaware that the majority of the population was either abducted or dusted. He searched for a way inside, or a way to free the others.

One day while exploring for supplies he found a rift where he had stepped into it out of curiosity. The rift closed behind him as he witnessed Error!Sans, in the middle of arguing with Ink!Sans, tear apart an AU with his strings. It triggered a fight between the two. While they fought he investigated the scraps of the universe only to realize it was his own. Ink was first to notice him and ended the fight quickly.

Later down the line, Cyan became the successor of both Ink!Sans and Error!Sans

Cyan!Sans has three main appearances that only occur during specific events.

In Neutral form Cyan!Sans is a curious-type character. He will not fight unless he has too. He is very friendly but is also very careful when approaching or interacting with others. When asked about his past in Neutral form he will dodge the subject, or change it.

In Pacifist form Cyan!Sans is an innocent-type character. He is considered a True pacifist in this form and will refuse to kill anything. He only fights if forced too, but he will always spare the opponent. He isn't a fan of being sexualized and gets offended if called a bad friend. He's a pushover unless he's serious about what he's doing. He accepts his past and will willingly talk about it to those curious. He meets "Alpha" in this path choice.

In Genocide form Cyan!Sans shares the will of Error!404 and has been made into a "puppet" with the consciousness of this. He doesn't care what he's being used for, he just follows orders. When Cyan meets 404 he was given a choice. In genocide, he chooses to help 404 in his plan. GenocideCyan!Sans's personality persists of him being a huge pervert, a jerk, and overall a bad friend. He doesn't like anyone but 404, and he tolerates the other team members. He likes to reference memes and doesn't take his job as seriously as the others, he will still get the job done though. If he sees a Human he will act out violently, Humans trigger the "PTSD" of his past. When asked about his past he will tell you to never bring it up again and dodge even mentioning it anymore.

GenocideCyan!Sans is the "Puppet" of Error404!sans he is fully aware of it, and doesn't care. The moment he gave to Error404, he gave up every ounce of his emotions to become a complete Narcissistic, arrogant, Jerk. He only cares about Error404, and no one else. Sharing the Will of Error404!Sans and having his "Word" Cyan will NEVER betray 404.

Cyan, in this form, has no need or urge to spare someone. He lets his past corrupt and will refuse to talk about what happened at all. His excuse for killing is it "makes him feel better." Even if Error404!sans doesn't want him to kill, Cyan will do it before he extracts the codes of that world.

Gaster blasters: like classic sans he has Gaster blasters which he can use to shoot and attack with. Depending on which form he's in will change the look and style of his Gaster Blasters.

Creation: he has a Spray Can he keeps on him, he can use this to spray a mist of colors. From it, he can grab hold of anything artificial. For example, say he needed a campfire, he could gather all the supplies from a simple cloud of colors. This can also be used to create anything he can think of, as long as it's inorganic. This tool was given to him by Ink!Sans.

Destruction: he has a whip created by Error's wires. With it, he can lash at enemies, or reach hard to reach places. For example, he could use it as distant combat or could use it to knock something down to catch. This tool does 20-30 damage depending on how accurately he hits you with it. This was given to him by Error!Sans.

Bone Manipulation: can use bones to attack with, these also deal 1 damage each +poison damage.

Blue attack: can use blue bones and gravity attacks, he cannot use this on items.

Patience: doesn't feel the exhaustion from battle and has high stamina. He won't ever get "tired" because of his soul trait.

Adaptability: this ability lets his weapons or body change according to his path. I.e. Genocide and Pacifist.

Blackout: When he enters what's known as a "blackout stage" his blasters gain their personality and come to "life".

Nimble: Having quick reactions and great flexibility, he can evade the majority of enemy attacks or strikes.

PTSD: at random intervals, or triggered points they will experience a point in time where they "stop." Giving an opening for a limited time.

Belonephobia: upon sight of a Needle Cyan will freeze up and go into a "blackout" phase. In this phase, he becomes unresponsive to most things. While in this state a blaster will form to guard him. He refuses to move in this state and will mumble things about his past, his blasters will protect him.

A Good pun: in any form, cyan Loves a good pun. Cyan loves a good pun! He loves them so much he WILL pause in the middle of a battle just to laugh about it. This leaves a sliver of an opportunity, but he is nimble.

Shadow Walker: During the Genocide path and after speaking to Destro aka Gaster, he is given this ability. He is given the ability to evade some attacks and moves. Still affected by blue attacks and some colored attacks. He will become a shadow and his speed becomes increased. A small time frame before and after he will be able to levitate. (Ability gained)

Cruelty magic: Cyan gains a weakness to purple magic abilities. When hit with it he will have to recover to continue to fight, if too much damage is taken he will retreat. (Weakness gained) 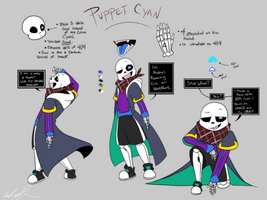 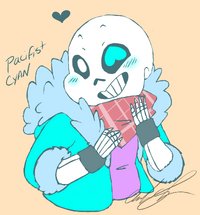 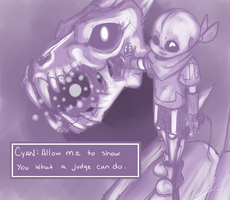 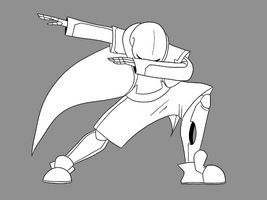 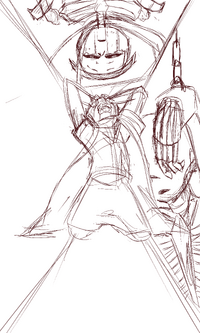 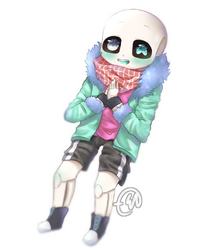 Drawn by icefireemily on tumblr 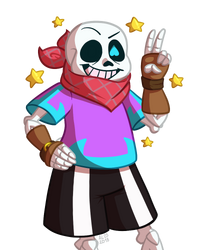 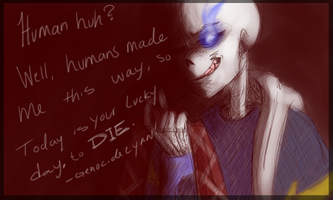 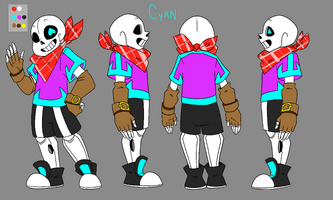 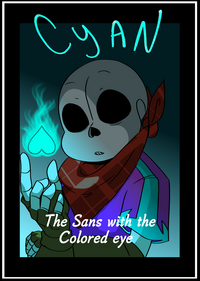