"I have to protect everything i see as important, but WOWIE do i need a break"
– Delios

Delios was created just like Undyne but was designed to be all-powerful to keep others from rising against them. The only way to do this however was to inject the living lifeblood into Delios himself not only making him the most Alphatale like characters that could ever live but also making him pretty much a demi-god to others who didn't have his similar traits or strengths. Once he was created his first task was to defeat Undyne and the Humans which he did with little effort.

Delios later on once Jacob and Ares arrived would be tasked with taking care of Ares's every need. Delios fought a lot and that meant he needed someone to train with, He came across Red who seemed to need some training themselves so he began to spar and train Red until they too were close to what Delios was. Delios during AlphaTale's destruction decided to embark on his quest before everything went to hell, so he wouldn't be there to help anyone who needed him.

Delios appears to be a tall skeleton with a brown scarf and body Armour. He also has the Astral Mother brand on his right side of his armor.

Delios still has a lot of what makes Delios. Delios, but with a tad of a darker tone to his character. He began to change his tone as a person due to his involvement in everything, and found his life to be quite meaningless as he went about his time, only training and the occasional timeline mix up. Delios has always been jealous of his brothers for their ability to gain the Astral Mother's affection so he shut himself away from them alot of the time.

Delios can shatter thousands of bones and turn them into shards of bone, only to fling thousands of those shards right back his opponent causing massive and permanent damage.

Delios can build a Tower of bones around his opponent and then sending it falling on they're head dealing a massive amount of damage.

Delios can rip whole chunks of land out of the ground or anywhere really and build them up with bones and blasters alike until they reach an unimaginable size, to which he then sends it hurling down.

This Blaster was imbued with pure AlphaTale code and would only do incredible damage to those with it summing around 900 to 4,000 Dmg

If Delios survives a large attack he has the ability to dish it back 30x Stronger then what he got hit with.

Hammers of Jealousy and Resentment

Delios can equip two large bone hammers that both weigh over 30 tons much to heavy for a normal man, They were a gift from Ten themself and allowed Delios to end whole wars so long as he fueld them with the proper emotions. The Hammer of Jealousy can wipe out hundreds of enimes and does loads of physical damage while the Hammer of Resentment does Physical and psychological damage and can cause those it comes into contact with to commit suicide or give up on their lives entirely.

To find and Kill Jacob and rescue Ares 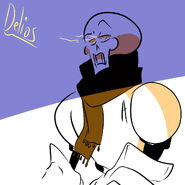