Alphatale Wiki
Register
Don't have an account?
Sign In
Advertisement
in: Articles that need to be improved, Articles lacking sources, Characters, Humans

"I have no real path other than the ones others give me..."
– Frisk

After the Astral Mother's take over of the underground, Frisk's first course of action was to threaten the human race along with Chara. They bargained that if they were to get two subjects for their new test that they would leave the humans alone. Humans were fearful of what would happen than proceed to give two human infants over to them for their experiments.

In the Underground (Frisk)

Frisk during his time down in the underground was experimented on to understand the power known as Reset, But after 5 long years of training and gruesome test the Astral Mother came to the conclusion that Reset was overall "Useless" ability and so in an attempt to defy the laws of physics she proceeds with trying to get the Human (Frisk) to tap into a newfound power, something more profound than Reset, but much more Stronger. The Results were...Extreme

Frisk is a quiet almost nonverbal individual and rarely truly speaks unless spoken to. With Chara however, Frisk is very verbal and has no problem speaking their mind. Frisk has a very passionate soul and would never strike against another...unless it's her.

the idea of a future where the queen is no longer a ruler, but this dream wouldn't be met in their time.

The Children of the Astral Mother

Frisk isn't one to push the sins of the parents on their children. But some of the kids are the exception.

Chara is without a doubt the light in Frisk's world. He is the only one that keeps Frisk hanging on.

The Astral Mother is the bane of Frisk's existence and if He had the chance would end her life.

Frisk had no DT when growing up so being forced to hold in all the DT form the past war victims was a huge stretch. The test was successful but at the cost of their lifespan and Weak physical form. The DT use fights for them coming at the opponent in waves of slashes and rays. Once Frisk begins to fight the DT reacts and acts more vicious with 10x the Attack speed and power.

Whatever bloodline Frisk came from has an everlasting effect on them and those who surround them. This effect dims the mind of some few who aren't immune to its toxic effect. The effect of this gives off Migraines, severe sickness, and ultimately full unconsciousness.

The button that frisk obtained from their training was something unlike the multiverse has ever seen before. It had the capability of keeping the items he used to possess from his previous life/reset. This button also has a reset side-effect that keeps others from using buttons for 30 minutes.

An ordinary Katana but once filled with Alpha!Frisk's DT can turn into a powerful weapon. The DT Katana is frisk determination manifested into a weapon. The weapon can give off various effects and side-effects when used in battle and can only dish out as much damage as the wielder can.

This ability allows the Katana to extend and go as far as the user can see.

This ability allows the Katana if inside an opponent or had already cut them, allow the user to absorb a little DT from the opponent. And if they have no way DT than it can drain they're life source/HP.

The Hate Katana was activated after Frisk was injected with gallons of the stuff while trapped up in the BioTale Au unable to escape and being tested on by Bio!Gaster.

This doesn't just affect others, but Frisk themselves, the Katana only affects those the user hates the most or just hates and so it will burn any and all who the wilder despise.

This allows Frisk to cause pain to any figures or people who have conflict within themselves allowing him to damage people without touching them so long as the blade is equipped.

Frisk wishes to kill all existing entities that come from AlphaTale except for Chara. 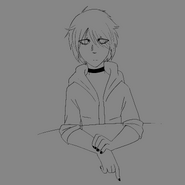