"I can feel all that emotions iv ever wanted to feel!"
– Hollow!Ink

Ink had always worked with Alpha!Sans since the beginning and aided him wherever he was needed and even still annoyed Error from time to time, but during the events of chapters 3 - 7 something began to change in Ink. After his deal with an Unnameable he soon would be given God like powers and even would gain emotions forever. However it came at a price, he would always be haunted by the voice of the creature and he would be as far away from the creators as possible no longer able to talk or hear they're wishes and now possibly is no longer a being of free will, but is perhaps now under the control of a being he couldn't ever hope to comprehend.

Ink is cold and yet very emotional and expressive with all his more darker sides, ideas and nature all brought to the surface. Ink is incredibly emotional and doesn't hold back, being very expressive especially with Error who he now is able to express his deep hatred for.

Error!Sans: Ink has a large distaste and hate for Error, but also enjoys messing with him, but never to the point where he gets too friendly he was taught better then that.

Alpha!Sans: Ink was pretty much raised by Alpha, however coming from a dark and horrible home Alpha had a tendency to be cruel and relentless when it came to his training to the point he even suggest Ink stop using vials entirely for they made him "Incapable to do his job". Alpha however was the only thing Ink had has family and since Error was made to be a enemy and he was told to stay away from him, he only had the Ghost to look towards.

The Unnamable: The only being to show him comfort in a world where everything he was taught was falling apart Ink utterly chose a partner he knew he could rely on rather then anything else, how as Transvoid beings work Ink was and is still being heavily manipulated by the being, it is unclear if it is even Ink in control or he's just being instructed from inside, free will also may no longer exist, but the being is so attached to him now that Ink wouldn't be able to tell if he was truly being controlled.

Error404: He was once given the option to Join him, but refused due to his current relationship and partnership with Alpha

he's able to summon his blaster from his ink.

with the new soul Ink is able to fly around

with the new soul Ink can change his body and do just about anything with it.

Ink's new soul is the hardest its ever been and is unbreakable to most effects or most people.

Ink's new soul allows him to over power anyone, no doubt even the strongest amongst the Alphaverse crew would find him hard to pin down.

similar to another skeleton, Ink can absorb and devour other Aus or individuals adding to his own strength.

The Inkmation is Ink's being like form, giving him near unlimited power for a short period of time less then 5 minutes but more then 2. The Inkmation is incredibly powerful and obliterates anything in its path way and can destroy about anything it wants, but the form is almost never in Ink's control for this is truly Ink at his worst.

The Inkmation's only attack is it's strongest, firing what can only be described as a fraction of the Unnamble's power, This attack is so strong it causes a singularity sucking in hundreds of Multiverses at a time into one point of non-existence to where they will never return. 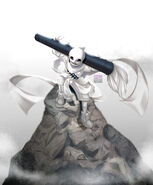