The Infected
The Broken Heart

"What makes you feel fear? Is it the worry of death, or the pain that comes before it?"
– Infected

Infected is a chaotic psychopath that seeks the pain and suffering of all that he considers wrong.

Infected hadn't always been the way he was. Long ago, he used to go by the name of Jacob. Carrying that name, he had been born by the Void Empress, alongside his brother Ares. Through being kidnapped by a woman that went by the name of the Astral Mother, he was subject to experimentation under her hand, a simple toy for her own pleasure. Through this, Jacob experienced true suffering like no other in the underground.

From each experiment, he grew more and more resilient to the pain. The torment and mental stress stuck with him, although the physical suffering had settled at once. He soon began to come up with stories in his own mind. A guardian, of sorts. A guardian to protect him, save him from all suffering within the world he had been pushed into. This had created Infected. Infected was a sort of relief for Jacob. He always used Infected as a way of comfort. An entity to look up to in his darkest moments. It was only until the last experiment that Infected had taken over his mind completely.

Through his insanity, he barraged into the underground, rampaging at everything he saw without a hint of remorse or desire to leave anyone standing. Cold-hearted, crazed and tired of it all, he simply let out his rage, pain and suffering with the only way he knew: pain. With each bit of LOVE building up, his mind had became far more pushed by the will of Infected, who once had been a relief, now a controller.

This had left him where he was. Cold, heartless and brutal, using his pain and torment as the only viable method of comfort.

Infected carries a red jacket that covers a black, buttoned shirt with the collar up high. He wears a simple black belt with a rectangle golden centre-piece, keeping his black pants in check. He then wears heavy, black boots as well, matching his shirt and pants. His eyelight is on the right side, being an extremely overgrown white pupil.

Jacob maintains a white poncho over the same black T-shirt, having a white undershirt below the shirt, all the way down to the black, fingerless gloves. The poncho works like a scarf in a way. The poncho has the Alpharune symbol on it, alongside one on his kunai. His belt has turned into that of a utility belt. He wears white pants and shoes, too.

Infected is a cold, brutal murderer, finding pure joy within the chaos and torment of others. Being born through Jacob's torture and pain, he has become an agent of chaos, living to find the pleasure in harm. Constantly stuttering through his words, Infected loves the sight of pain. Alongside his crazed words, he tends to repeat himself far too often, often stuttering and lunging out randomly from the rage of something as small as the stutters. Seems the Astral Mother had a far bigger impact on him than you'd expect. Many assume Infected to be insane. While he may be a psychopath, he most certainly is aware of what he's doing. He doesn't care about who he hurts, which tends to make him harm himself at times. He just likes the idea of doing it.

D2 is the embodiment of the good within, showing a true light inside of Infected that hadn't been there for a long time, not part of the true relationship between Jacob and Infected, but instead is more of a singular entity acting on their own when control is given or taken by them. Their entire goal is unclear, but causing harm to others is the last thing on their list.

Jacob is far different from Infected. While Infected was born in chaos, considering it the only method of joy and peace in his life, Jacob remembers the early days of his life before the Astral Mother. Jacob is far more frightened than frightening. He tends to lash out at those that get too close, although otherwise is timid and calm. He loves to speak in soft, easy tones, singing to himself of happy songs. He doesn't suffer any depression, although he most certainly is sad.

Wisps are souls that Infected had transferred into mindless, boiling pieces of torment, following Infected blindly without a care in the world. Wisps range in size depending on the vessel of the monster Infected had murdered. Wisps may combust if Infected desires so, the severity depending on it's size. A small wisp is powerful enough to destroy a small city block, while a large one can destroy an entire mountain or worse.

Infected's axe is a prized possession of his, using it only for the most earned kills. Despite it's extremely short length, looking more like a cleaver, it was once an axe, so it still retains that name. It has a special SOUL Bond to him, allowing for him to use his own soul to chain onto the axe, essentially being a physical soul connection.

This allows for Infected to let out a scream so brutal and ear-tearing to the degree that it completely stuns his enemy, restricting them of using magic until they regain their hearing, which most likely would be in a few days.

This ability allows for Infected to strain his arm, striking at such a powerful pace that it can shatter the guard of gods, completely destroying anything weaker.

Infected can leak his black blood all over his body, allowing to make him completely immune to all forms of physical damage, only being harmed by magic and such.

Infected can reach inside his skull, allowing to take an opponents SOUL right from them and pull it out of his head, a quick and easy chance to murder.

Infected can expand his bones structures, allowing to change height and such, to go from his usual height to that of Onionsan's.

Infected can consume any organic structure, allowing for him to gain certain abilities made from said structure. This most commonly works for monsters, yet can also can work for plants and such.

From meeting with the avatar of a creator, Infected had tested his Cannibalism ability. Biting the avatar, he had been given the ability to form objects up to the size of a spear. Each time he uses this, it tires him.

Corroded, rotten bones that carry disease on them from their state. Best to avoid.

As Jacob, while maintaining his previous abilities, he gains a few more.

Jacob can form his own body into a large, purple flame. This makes him physically unable to be harmed, yet magically vulnerable in many cases. This allows flight and fast movement.

Whenever the Sun is present, Jacob gains a special boost of energy, allowing for limitless stamina.

The second Jacob kills someone, he will get a memory spike of the things he done as Infected, forcing him into a terrified, yet brutal mood.

Infected is extremely weak to what Jacob once was, tending to avoid that which Jacob loved. Calling Infected Jacob will give him two reactions: he will kill you, or he will go numb, completely paralysed physically. This will allow for a first strike, yet the moment any physical thing is in contact with him, he will return to his mind.

Jacob is weak to attacks mostly affiliated with cold and darkness.

Error!404 - When it comes to terms with Error!404 and Infected, they're like two sides of the same coin. Despite how Infected may be the cold, brutal and psychopathic one, things change when the two fight. Error!404 strictly focuses on murdering Infected, while Infected only toys with him. The two truly do love eachother.

Astral Mother - She never deserved what she got, yet she still got it through horrible means. Infected despises the woman more than anything. He would do anything just to cause her eternal suffering. Death isn't enough.

The black being is a form that Infected cannot control the moment he enters. This is caused by Infected feeling a strong form of madness to the degree it takes a physical toll, entirely covering his body. It is around the size of an average modern house, and consists of pure, black matter. Infected is essentially subconscious in this, relying off purely instinct. While no longer having any magical properties until the form fades, it is physically powerful in many ways, able to crush anything, the Black Being is able to move around at immense speed and the wisp in this state are about the size of a large truck or bus. The Black Being produces a strong immense aura that inflicts anyone within a 4 lightyear radius the "Madness" infliction causing unescapable nightmares and hallucinations of worst fears, horrible futures and untimely deaths.

The wisp in this state are insanely destructive with just two large wisp having enough force to detonate the earth and moon together and a full Haunting being able to destroy a entire galaxy.

Soul Harbinger is an essential evolution of the form prior. Following his major strength and godlike power, he now consists of flames so powerful they can burn anything within a 100 mile radius. The forum is compltley indestructible, unkillable by normal means and with the boosted GIGA!Wisp unbeatable. With its large black flaming trident it can pierce literal gods and burn them to cinders, its power forever skyrocketing until it reaches a unattainable ceiling. The flames of the Harbinger are so hot they can melt away the atoms of others before even getting to their actual physical forms buring people from the inside out.

GIGA!Wisp are large wisp that grow to the size of small universes and can destroy entire Multiverses at a time if there is more then three at a time. The GIGA!Wisp feed on absolute matter and dark matter for their energy and detonate all that matter deep inside replicating a explosion equivalent to the big bang itself. 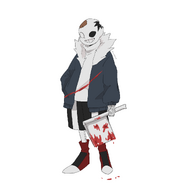 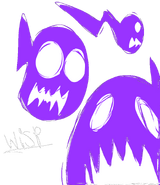 Two sides of the same coin - Created by Ameyugi_clone 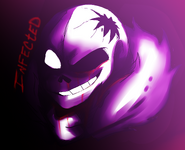