"You dare defy me?!"
– King Multiverse

King Multiverse is the creation of Error!404, made to take the title of King in the Multiverse.

King Multiverse's past is unknown to most. One day, he simply shown up and began making orders as if he ruled the place. Through his connections to Error!404, more importantly Alphatale, people began to fear the King. His menacing posture, his demanding words: he certainly left a massive mark on others within the Multiverse.

As the days progressed, people shown far more loyalty to the King. Through this, his ego soon grew to the degree the King had a belief he could beat Error!404, his own creator. Of course, despite his close success, he never succeeded in full. This had then given him the realization that he wasn't at the top.

Through the command of the King, those such as Ink and Error soon began to provide loyalty to him. Some say that the King was actually Error's master, and not Error!404. To fuel his ego, he did indeed let it come off that way. From all of it, he now stands where he is today, in "control" of a deadly multiverse, attempting to reign supreme no matter what. Through devious tactics, he will always come out on top.

King Multiverse is a 6'7 monarch, his height always being as tall as can be through his tall posture. He wears a black jacket, most commonly emanating a purple hue due to the light from his eyes. He wears a brown scarf over his neck, mostly for style. The jacket is zipped at the bottom, and the zip itself is a deep sky blue. Alongside the deep sky blue zip, he also wears a sky blue chestplate beyond his shirt, able to withstand any attack directly against it through kinetic absorption. The right half of his body is a black with thin, neon purple blood marrow within it. The left half is a simple white. He wears shorts alike to the original Sans, almost as a commemoration to his original base. He also wears grey slippers.

Cold, deceptive and moralless, you would mistake King Multiverse for a monster among monsters. Unlike his mentor, King Multiverse is truly heartless to the bone, not willing to take any risks at the cost of his extreme power. To remain at his side isn't a manner of him liking you, yet instead for him to simply tolerate you.

Beyond the truth of his monstrous personality, he prefers to hide it with formality. Taking lessons from his mentor, while not being good at manipulation, he is most certainly good at faking the type of guy he is. He comes off as such a kind king, willing to help anyone. Who would fall for that?

Large, black blasters that fire out a beam as magenta as his eye. This beam is so powerful that it has the ability to nullify the code of God-Like entities, bypassing any defences to truly damage them as if they were a mortal, erasing them entirely unless they are to escape. The blaster has an extremely long windup, yet comes off handy when the time is needed.

While King Multiverse himself cannot teleport, he can cast wormholes of any size, allowing him to traverse across any point in time and space within a timeline. However, checking the past and future with the wormholes does not inflict what happens in the timeline. If he went into the past to see the old Alphatale, no matter what he did then, the moment he returns everything would stay the same.

These chains allow for King Multiverse to latch onto entities, trapping them in any manner he wishes for it to occur by. These chains are summoned through large wormholes, coming from any direction the King wishes. Upon latching onto them, they can switch between the colour of red to take HP, blue to take mana and green to give HP.

King Multiverse can simply hit a button, differing the results with each entity. For those that can SAVE and LOAD, the button sends them into the savescreen, forcing them to load back to their previous save point. For those that cannot, the button will entirely reset their stats to what they were prior to being in the timeline King Multiverse resided in. For those of extraordinarily weak skill, they will even be reduced of their memories.

"Through tough and easy, through thick and thin, whether hot or breezy, light or grim. I will pledge my loyalty to the true King of the Multiverse."

For those that pledge loyalty to King Multiverse through reading his oath, they instantly connect to him through a SOUL Bond. This allows for him to control them, commanding them to do whatever he wishes, even to the degree of sacrifice. This included Ink and Error, who had sworn alligience to the King.

All form of buttons do not work on King Multiverse due to his SOUL Bond to those with codeless bodies, alongside Error!404's magic.

King Multiverse can use a special form of reset to send all forms of code back to their original state. This would turn Error to Geno and Geno to Sans. However, it comes with a catch. Anytime King Multiverse uses this button, it will crack his chestplate. The moment it shatters, his SOUL will reveal. This will essentially allow about anyone to deal severe damage, making this a complete last resort with a guarantee of success.

Whenever King Multiverse may need it, he can call upon his creator through telepathic connection, allowing him to temporarily assist King Multiverse. Through doing so, this allows for King Multiverse to get an extreme surge of power, letting him cast the MAINFRAME CANNON, a blaster with a white exterior excluding the black jaw, firing a pure, blue beam that sends out a massive shockwave. This beam is so powerful that it can wipe any entity in a 50m radius, no matter their strength. The moment he uses this ability, the boost ends.

Error - Error despises King Multiverse. Being forced to take the oath due to Error!404, he has always hated the crowned tyrant. Seems that'll never change.

Emperor Multiverse is the result of King Multiverse extracting pure data from the Mainframe, becoming truly godlike alongside the other gods in the Multiverse. This form has no new abilities, although it instead improves his past abilities. He can command those by simply staring at them, no longer needing the oath. His Asset Reset will always work, never having any drawbacks. His blasters also no longer require a large windup, firing in short bursts.

In many ways, this form can allow for Emperor Multiverse to overcome Error!404, too. It expands his connection to the multiverse, allowing for him to read the minds of all those he had bonded his SOUL to. 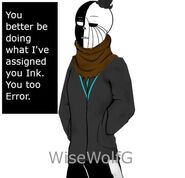