"I gotta keep training, for my master i must!"
– Lucy

Lucy was spirit stuck in the muck of the world, left down to suffer and forever be alone. Until however one day they found themselves a body, a old machine like body that came form the laboratory above in hotland. Lucy lived in that corpse like body for months, each day wondering around and trying to fight against others who wanted to abuse the more feminine side of the body's structure however Lucy's body was durable and enabled her to essentially take out all manners of opposition. During they're days of fighting in the garbage heap they would then find themselves face to face with Papyrus/Delios who would then find themselves training along side him, he let Lucy known that he wasn't meant to have any kinds of apprentices, but choose to teach them non-the less.

Lucy severed in many battles and many of them caused them serious harm to the point they needed "The Gift" just to go on. Soon however the Astral Mother would find out about Lucy's existence and would order Delios to get rid of them, but when the two were alone he instead banished Lucy and threw her out of the mountain never to be seen again.

Lucy is a little hot-headed, but mostly is calm and collected when it comes to confrontations. They enjoy meditating and doing loads of yoga when they get the chance. Their sword, the Tensho is the only thing they have to remember AlphaTale by and they hold if very dear to their heart.

Lucy wears a large purple sweater covered by a large black cloak that is just about as big as her whole body, she walks and does combat in high heels made of armor plating.

Lucy has a brand from Delios keep them safe from harm and allowing for them to be able to survive almost planetary destructive events. 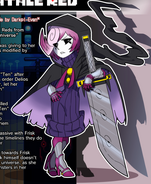