"My bugs will make quick work of you!"
– Mew Mew Kitty

The lost soul of Erma was forgotten entirely after the monsters moved down to the underground, years they spent down there without ever being seen or heard from even their own Sister soon rose up and found a purpose, but not them, they just were unable to find any reason to live. However one day while going through the waterfall cameras the Astral Mother found Erma lying in a pile of despair and like the angel they saw her as picked them up and made a new life for them as their servant and assistant in keeping order in the kingdom. Erma would be given a new body, however unfortunately this malnourished corpse of a body was the only thing the Astral Mother "could" make for them to live in, Erma didn't mind and tried it out. Erma hated it at first, saying how the arms were too flimsy and body too branchy, but eventually grew a liking to it. Erma would later figure out that they had a good attachment to bugs and insect life, this would later help them in cementing their role and abilities, after being trained by Delios and Undyne while being Supervised by Aurora eventually Erma would come into their own and establish themselves as another Elite among the rankings

Due to their distance from Humanity and Monster kind, Erma is a bit of a enigma in terms of social interactions and being nice or rude, often trending the line with great care. Erma can be seen as being weird and or creepy, even stalker like in terms of how they treat people. Erma has been put on multiple watchlists due to these and is known to be very weird and god awful to others when alone with them even to the point of being sadistic.

Erma's Mew Mew spiders are poisonous and deadly, being able to kill a full grown man in just 2 bites, they also travel at speeds of 60 feet per minute letting them cover large distances quickly.

Erma's Mew Mew mosquitoes are vicious able to drain blood very quickly, only 3 are needed to suck a full grown horse dry while a hordes can turn an entire army of soldiers into raisins.

These colossal sized beast are ginormous, standing at a height of about 30 feet while being about 50 miles long, these things only require one thing and that's human flesh, Erma self-made these types themselves and they only obey them, they can devastate whole armies and even destroy entire cities, as they say "If the ground starts shaking, RUN!"

Another modified insect, these larger then life beetles dwarf some small buildings in terms of their huge size and can devastate whole country sides with their large bodies and incredible jaws and claws. 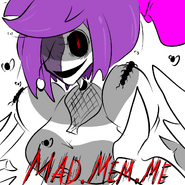