Alphatale Wiki
Register
Don't have an account?
Sign In
Advertisement
in: Articles that need to be improved, Characters, Chapter 1,
and 2 more

"Chaotic Heroes, Noble Villains. Which one is truly good?"
– Omni

Omnipotent!sans used to resign in Alphatale and was known as Ares among them and lived in the laboratory of the Astral Mother along with his brothers William, Adam, Jacob, and Deilos. Deilos however was the only one of the four Omni had that hung around. Deilos and Omni's relationship with Omni got closer as the years grew on and Deilo's hatred for his other 3 brothers grew even larger over time. Deilos and Omni one day summoned to the underground laboratory of the Astral Mother. She asked for Ares to carry a book around with him, a special book, however. When asked of its content she simply replied "The Future" and she continued with her scheming after that. Deilos and Ares were the only 2 who lived in the laboratory with the Astral Mother and the 2 humans the other 2 had left a long time ago. Deilos shortly after Ares was given the "Future" he was assigned to always be by Ares side and guard him with his life. Deilos however obedient he has had a wave of anger inside him that Ares was aware of but never took the action of.

One day the Astral Mother asked for all the boys to get together to train together, William argued with the Astral Mother the whole time and Adam just spared with frisk while making idle banter and Deilos was focusing on Jacob but made no contact with him. After what felt like hours Jacob finally rose from where he was sat and then immediately charged at Ares with no warning and stabbed him right between the eyes with a sharp rock, the other brothers pinned down Jacob as Jacob screamed violently cursing and swearing at Ares and the Astral Mother. The Astral Mother took Ares to the sub lab to be healed and then threw Jacob away. She was just going to heal him, but instead, her bad intentions got the better of her, and instead she decided to mess with the boys' powers and body while he was under surgery. Ares woke up a year later with no real recognition of what had happened.

He awoke to find Deilos missing from his side and the alarm sounded and blaring all over the underground. Shortly after though the book on the desk next to him began to blare and shine a bright light and then sucked up Ares into it...

Time went by, moment by moment, second by second. Back and forth, he constantly was made to do things, without his own free will, strapped away from all forms and meanings of emotion. Eventually, he had been taken away from life itself. It was only a matter of time until he had returned to show the meaning of his name.

Omni and the Bookkeepers

Omni and the Witch Tower

Ares, settled and calm, is a strange entity to encounter. Cold and deceptive, he comes off emotionless at first, yet with his fighting methods and stylish flourishes in combat, he seems to have some form of emotion. Very thoughtful, Ares always tends to question things, keeping himself in a dull mood. He does not show any form of verbal emotion, and sometimes he doesn't even feel the emotion. He comes off emotionless very often, enclosing his true feelings to accomplish the goal of Ragnarok.

Omni lives to fulfill the prophecy of Ragnarok, ironically from Norse Mythology, despite his Greek name. He lives to act the day of utter chaos and destruction, the war to end all wars. He will not stop until he achieves his goal.

Omni can fire multitudes of red lightning throughout his fingertips, being as tough as an electric shock or as tough as a Death Ray. The length of these volts have no bounds. He can also use this for lightning bombs, and other lightning-based attacks. This also allows for him to alter electrical waves.

Omni can carry two moons with ease, having extreme strength with barely any limitations.

Omni can transform into a ghost-like form, essentially being dead in this way. He cannot fight at all or be attacked with this form and can only move around in the body. This allows him to go at Faster Than Light speeds. He cannot regain health or regain stamina in this form either. It's like pausing a game for him, in a way.

Omni can have complete control over a SOUL, being able to infuse their SOUL with determination, slowly shifting them to become an amalgamation.

Omni can control fire, altering it's temperature to make it hotter than any possible limit, being able to incinerate an entire planet with a single torch.

Omni's right eye isn't present unless he wishes for it to be. The eye is like his left eye, yet it is white and has 12 small lines resembling a clocks numbers. With this, he can look 20 days into the future, and also 50 years into the past, in the very place he is at currently.

Omni can drain a trait, giving the monster/human a negative variant of their trait in response. (E.G, Absorbing Bravery makes them temporarily feel Fear.)

Omni, being extremely agile, can run up to speeds of mach 10.

Omni's left eye can turn a citrine yellow, firing a single bolt of lightning which would destroy a whole city with it's sheer strength.

Omni can manipulate the flow of gravity, allowing to invert the momentum of an object to diagonal, horizontal, or vertical. He can also initiate zero gravity, which is a state of zero force of gravity impacting the object.

Omni can manipulate time to a very low extent, allowing him to alter times length, slowing it, speeding it up, making a day longer or shorter. He can also alter certain parts of reality, allowing for one person to be slower than another.

Omni can summon light-based attacks the size of a moon, from a light sword to a light god. Every light-based thing he summons has a red hue around it.

Omni can duplicate his body up to four times, at the cost of removing his god-based abilities, revolving solely on gravity, his raw strength and speed.

Omni can condense the very air around him into pools of water, allowing him to completely control it in every possible way. This gives Omni complete water manipulation. You don't wanna fight him in an antivoid.

THIS FORM IS NO LONGER POSSIBLY ABLE TO OCCUR.

Omnithorn was the result of Islothorn powering up Omni, however this form took a dramatic effect on Omni, leaving him completely immobile and dead. The transformation was measured by percents and when a certain percentage had been reached then the effect from before start to take a drastic toll, However as a plus side, Omni was able to achieve groundbreaking feats while in this state including getting entirely new moves.

A good percentage and is whats used by Omni when he faces enemies that prove to be too difficult for when he's reached his normal limit. The form however does drain his life and magical force drastically and can tire him out within merely a couple of minuets.

At this percentage Omni not only can transcend moving faster then any living focre itself, but he can also hit opponents with enough force to shatter a mountain and can even destroy most moons aswell. Omni in this state can also begin to summon lighting and can use it more proficiently after this percent. Alas though Omni begins to melt and his bones break with every move and his magic and life force drain extremely to the point he has a hard time maintaining focus and can even pass out.

At this percentage Omni moves nearly as fast as light and can attack without hesitation, he's constantly moving either it be swaying while standing still or running around at insane speeds, your more likely to catch his afterimages then him actually, However Omni is nearly melting away instantly and has to remain moving otherwise he will melt to the ground around him and die. Omni's use of lightning allows him to use two new abilities...

This stage Omni is in consistent movement and can hardly be seen much less be seen at all, Omni moves at the speed of light and can attack within moments or even instantly. However Omni can only remain in the form for 2 minutes before dying or melting away. Omni can no longer use his lightning and instead uses the wind as his tool allowing for him to punch opponents from a distant while letting the wind hit them with enough force to crush a star and distribute the gravitational pull of a super star. Omni's new attacks are...

Omni at this point isn't able to come back from this and will die once he's finished, Omni is literal force, practically untouchable and can hit with universe shattering attacks and can summon lightning storms so destructive they can shatter multiverses and hyperverses all the same, he moves so fast that going past a planet will rip it from it's place in a solar system and Omni's new attack is...

This attack allows for Omni to annihilate all forces around him with a single massive lighting bolt that can destroy entire clumps of Hyperverses and Multiverses all the same, this attack not only destroys his eneimes, but Omni himself aswell.

60% is a insanely hard state to maintain and was shown to nearly kill Omni upon even activating it for if he stops moving for a fraction of a millisecond he could end up dying instantly, however the payoff is worth for incalculable speed and immense power.

Able to wipe out and do away with the very concept and existence of others this attack is one punch, this one punch annihilates all in from it wiping them from the fabric of existence itself. 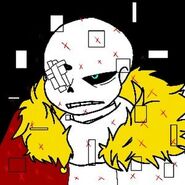