"I shall protect them no matter what"
– Quenya

Quenya was created by the Astral Mother years ago to help in ending the human war. Quenya guarded and protected the Astral Mother for years until her kids were born. The Astral Mother had gotten very tired of taking care of her children due to their constant needs so in a way to get rid of them and focus more on her work she dumped them on Quenya and told her to take care of them until they were grown up. Quenya although not very happy about it at first took the boys in and took care of them for many years to come eventually growing a motherly bond with them and vice versa. Naturally, when the time came to return the boys to they're mother they refused and instead stayed with Quenya. The Astral Mother was furious with they're response and decided to torment them for years to come, but with their newfound mother's undying will and boy's resolve, they were able to best the Astral Mother on many occasions.

Quenya during her many travels throughout the underground heard rumor of a scientist that had been put to the dungeons years ago, while the Astral Mother was away Quenya ventured into the deepest parts of the lab and found Alphys on the brink of death. Quenya rescued her and brought her back to full strength and let Alphys live with her and the boys. They all lived very happily together up until the eventful day when the underground alarm rang though out the underground.

Quenya wears common clothes with a long blue cape with the Astral Mother logo on it including a matching mask on her face to complement it. Along with that, Quenya appears quite muscular and wears big leather boots.

Quenya is still Quenya, but with a few tweaks. Quenya has an unconditional love for most sweets and loves the boys with all her heart and Alphys as well. Quenya hates the idea she was made as a weapon but shrugs it off a lot more often then she should, She resents the Astral Mother very much and the humans as well.

Quenya being created wasn't given an expiration date, so Quenya can live on forever if she pleases.

Undying Will and Strength

Quenya has a will stronger than any and that hasn't changed due to motherhood either. Quenya's strength and will are nearly unbreakable and she is often very intimidating to opponents causing many to quit.

Regain control of oversoul and save Adam and William 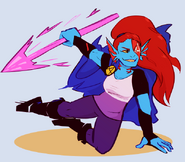 credit to the OG artist