"Such a Pity, Such a pity you would think to turn on me"
– Astral Mother

The Astral Mother was born not too long after the discovery of how to control the magic. She lived her life trying to manipulate these traits and such on, but after years passed came down with no results. But that's when the Human war came. The war would go on for what felt like an eternity, but the Astral mother had a grand idea for a way to stop and possibly win the war. She grabbed one of the nearby rivers and began to experiment on it until she could give it enough magic to kill an army, but she didn't have enough magic herself so... she would go throughout the battlefield stealing the corpses of dead monsters... even her parents. soon the creature would have enough souls and magic to kill the human army, but without a big enough vessel, the fish would most likely die from pure energy exposure. So the Astral Mother scoured again looking for more bodies to use, until she came across a dead human nun, "Perhaps used for prayer" she thought to herself. The Nun's corpse was taken back to the lab for experimenting and soon after...the Mighty being known as Quenya was born and once brought to the battlefield slaughtered the human army. The monsters were victorious. After it of recovery after the fight, Astral mother would thank make Quenya her grand guard, with Quenya as a great example of what happens when a great mind mixed with willing subjects leads to, the Astral mother ran for Queen of the underground 14 yrs later. She lost unfortunately after months of debates and was forced to become the King's royal scientist. After 24 years of service, Queen Toriel died of labor, and a prince known as Asriel died the same night as well. The King was destroyed with grief and went weeks and months without ruling the kingdom properly. That was until the Astral mother came with some tea one day and decided to ease his mind...The King would die that same day. After 8 months of preparation, the Astral Mother was named the Queen of the underground.

The Astral Mother appears to wear a Green suit and she is colored pink with dark tips on her fingers and down her hair.

She can be flamboyant at times but has a very good chance of being very distant as well as working in the shadows. She is known to be very manipulative and has no remorse for the things she's done for everything that's happened shes happy for whats happened. The Astral Mother is no Bitch either she has no means of backing down when being threatened and will fight to all means. The Astral Mother requires some semblance of fear in order to function due to her trait.

Her Experiments and contingency plan along with a few completed works.

Some are lost and others have perished unfortunately, These Experiments consist of her own and when she was trapped as the Defiled Witch

For every test subject and for person or entity she's tested on the Astral Mother has always installed a fail safe switch that allows her to turn off all her subjects with just a simple phrase. Along with that most subjects are in a powerful position making her the most influential women and most powerful women in the Multiverse.

If the Astral Mother were to ever perish or be killed she had many other model of herself made to replace her and continue her work.

As she was trapped in the Defiled witch her and the void empress thought up the idea of the 100 Lv plan which was the idea that if they got enough humans they could overpower Ten and gain their freedom, unfortunately Ten found out and now all of the humans that they collected are sitting on ice.

The Astral Mother in her earlier years established a connection between all Alphatale inhabitants that allowed them to tell each other apart from others. The connection so far as been a success.

The Astral Mother posses an orb that she made before the destruction of Alphatale. This orb was created to destroy almost anything that wasn't stronger than the orb. The orb is said to hold an entire Void inside it, and when used will suck up and destroy any things in its way, but only people like the Astral Mother can use it because they need a substantially strong grip, or they will get pulled into the orb, along with anything else.

During her travels, the Astral Mother discovered an AU that taught people the meaning of life and the true meaning of death. She spent much time there and was taught how to bring things back to life, such as people and smaller objects. Right now she is trying to bring back Alphatale.

This ability allows the Astral mother to shoot beams of pure terror at the opponent she is facing, causing them to die of pure fear if their will is weak enough and body as well.

Gen is an ability used to kill Pieces of code that has been replicated more than once.

This attack is a more potent and stronger version than the God ray, event to this day its power is unmatched.

The Alpha Ray was an attack similar to the God Ray to where you need simple to hold out your finger shoot out a blast through the tip of it. This attack if it hit any living person would cause near combustion and would most definitely kill on contact.

If this shot makes contact with a living person that person would die instantly with no struggle or afterthought, instantaneously. if this beam came into contact with an AU it would destroy it and then cause an aftereffect to where the Au will than drag 2 other nearby Aus with it cause the destruction of 3 universes.

due to her experiments on her Children and many others the Astral Mother if necessary can gain control of her children quite easily summoning them to fight for her.

Shown to have incomprehensible power, she is able to overpower and withstand all if not most attacks that are dealt to her. She's able to deal out large amounts of damage destroying most opponents she comes into contact with and even overpowering her son Adam in terms of will and strength, The form didn't last for a long enough time to determine her full power, but as was show she clearly is near the top of the peaking order when it comes to near impossible to kill.

With the power of the Multiverse, every soul and all the code of the Mainframe and more the All-Mother can bend the entirety of reality to her will. She can kill all in her wake and make any character to a lower version of themselves.

A Beam of death that kills anything it touches, no matter the plain of existence nor reality

The All-Mother's most best feat is her ungoldy like presence that cripples' anyone to the point of fear and helplessness.

With all of existence in her body, the All-Mother is unkillable in this state seeing as she can resurrect from nothing.The All-Mother negates death and is enirley immune to most sources of damage, besides her physical body tanking damage. 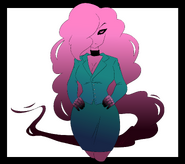 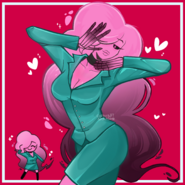 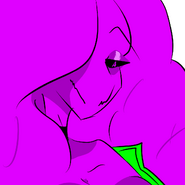