"You and I might be the same, but our motives are completely different."
– Void Empress

The Void Empress is an alternate version of the original Astral Mother, She comes from a Different timeline what kind is unknown along with a lot of other questions. She has sworn to make the Astral Mother pay for taking her kids.

Void Empress's Sigma Beam is a beam that nulls the abilities and minds of whoever it hits. Its able to also Kill, but is rarely used for that.

The Void Empress's grief and deep conflict over the loss of her children is so powerful that being in her presence can cause people to have strong feelings of anxiety, depression and even turn to suicide of they were already dealing with those problems previously.

the emptiness inside of everyone is under her control, her experiments with the void now allow her to manipulate the forces of void.

Blink and you'll miss it 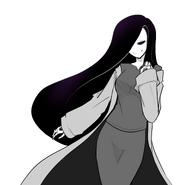 Add a photo to this gallery
Retrieved from "https://alphatale.fandom.com/wiki/The_Void_Empress?oldid=4597"
Community content is available under CC-BY-SA unless otherwise noted.