Tint was created by Ten no Kami in the Higher planes of the Anti-Void using pieces of what made ink well ink. Tint was raised there quite some time, his true creation phase didn't start until the X event began after that Tint began to evolve into his own. Tint trained non-stop for months on end so that he could eventually reach the same level as ink if not higher. It would take him that long to even receive his brush, but by then he was already a master at most forms of combat. Tint and Ten's relationship was nothing short of dog and master, Tint obeyed and Ten ordered him around. Unfortunately, one of the off days Tint had he had overheard Ten talking to themself about a set plan that they had left Tint out of. Tint than knew he had to escape and so he did, but Ten caught him at the last second and began to try to recreate him while he escaped, luckily he had made it out before anything vital had been taken, except something was his memories of Ten's plans. After that Tint made it his goal to seek out and find any other creations of Ten so that he could not only hopefully regain his memories but also have the strength to stop them and they're scheming.

Unfortunately, the more Tint goes on without his memories the more of himself he loses. But while he loses his memories his abilities get a huge boost in strength and DEF making him nearly unstoppable, Tint at this point has lost so much of his memories that he as a tendency to even forget the abilities and qualities that make him unique. Fortunately, his Rainbow hand has a factor that allows it to keep Tint from losing himself.

Tint appears very similar to Classic!Ink and even wears his old jacket around his waist except a little darker. he doesn't carry vials with him instead has an art satchel with him that carries art supplies. He has an ink splat on his face also except it appears to go farther up and is on the opposite side. He wears a long brown scarf similar to Ink's as well

Tint was made without emotions or personalities for fear of him growing corrupt or getting mushy. Unfortunately for some reason whenever Tint is within proximity of any other Ink of his (ex.Fresh!Ink) he tends to feel emotions.

Others of His kin

there is no mistaking that when Tint interacts with other survivors or inhabitants of Alphatale he feels a strong emotion.

Tint can fire a ray of ink out his fingertips with sharp and perfect percussion.

Tint can Cipher the creativity of others and turn them back to basic sans or whatever they used to be and if done twice will kill instantly. The attack is done when Tint's Rainbow arm stabs you with the tips of its nails and sucks out your creativity and uniqueness.

Rainbow Arm/Arm of a Creator

Tint's Rainbow doesn't just act like an extra Arm but depending on what color the fingers/fingertips are colored will give off a different type of attack.

if Red: The fingertips will fire concentrated DT or plasma

if Blue: will use a blue attack on you and won't stop using until the color has changed.

if Yellow: will shoot truck-sized bullets at you at the speed of sound.

if Green: Will entangle you in green vines that cipher your Hp by 50 every 5 seconds.

if Purple: will entangle you in chains that deplete your magic and soul force by 10s every minute

Tint's able to create Ink clones of himself. the first 3 always will be stronger than tint but for the rest, they will be weaker. and Ink can continue to make more clones the longer he produces Ink,

If Tint is killed his body will explode releasing Ink everywhere and whoever gets covered with it suffers 2 side effects.

Tint similar to Ink has no real soul, but instead in its place lying in the center of his rib cage is something...odd. Tint has a clump of black tentacles in the center of his rib cage that acts like his soul. This weird thing inside him is fully sentient and will instantly kill anyone who tries to remove it from its host. The weird clump keeps itself secure inside him by holding onto his ribs and spine and moves its tentacles throughout his body.

Tint's mission is to regain his memories and stop AlphaTale and all Aus surrounding it. 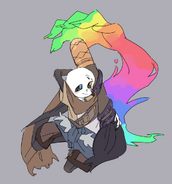 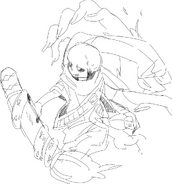 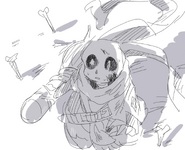 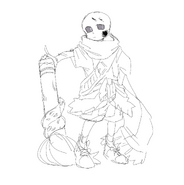 Tint by Hoba
Add a photo to this gallery
Retrieved from "https://alphatale.fandom.com/wiki/Tint?oldid=4104"
Community content is available under CC-BY-SA unless otherwise noted.